Cutest Dog in the world 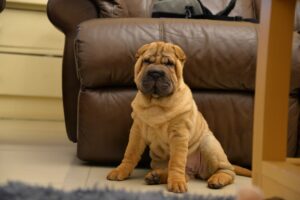 India Prem, The Cutest Dog In the world

India prem, also known as the cutest dog in the world, is A red thorn Shar Pei. She is helping her owner Aneeta with her immensely Painfuldisease Trigeminal Neuralgia. India is known to everyone who visits her day to day and is very excitable and playful. Not only is she the cutest dog in the world, but she is the most well-behaved, never disobeying her owner’s orders, and never getting angry. Even if they are being overly stressful to her 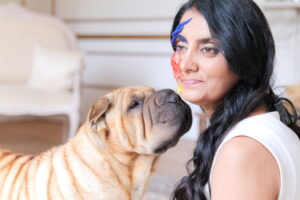 India, the cutest dog in the world, is also known around the world through her owner, Aneeta. She is the CEO of multiple charities, the Trigeminal Neuralgia Association, and the founder of Freedom Charity. Sharing her photos of India worldwide then got her to be an extremely famous dog online. This means that she is happy and lovable in front of hundreds, if not thousands of people around the world. Spreading not only Aneetas message but her own happy Tail as well.

Shar-Pei Facts and what makes India the cutest dog 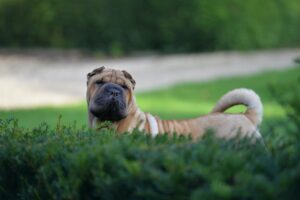 When not at home, India the cutest dog in the world loves playing with anyone, no matter how big or small they are. She has been to schools, train stations, and Many Many more, making everyone smile as she walks by them. The Chinese Shar-Pei did not always be so easy to tame and look after. The Shar Pei used to be a fighting dog, as the wrinkled skin made it very difficult for other dogs to hurt the Shar-Pei. Although In the 1970s in china, there was an enormous dog tax, causing Shar Pei to nearly go extinct. This then made Shar-Pei famous, as in this time they became the rarest dog in the world.

Superstar Dog with her Superstar Owner 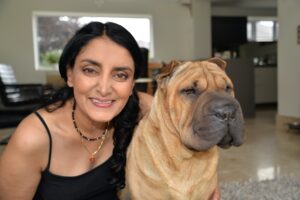 In Addition to India’s Hippopotamus Mouth, Shar Pei also sport a blue-black tongue to make them seem more ferocious. The only dog to have the same colour tongue is the Chow Chow, though sharing no genetic similarities. Aneeta is a massive fan of the Shar-pei and had three other Shar-pei in the past. The first shar-pei was Sensei which was a chocolate colour, then there was Diva which was a Blue colour. Finally, India is, as we described before, a Red Thorn colour. Aneeta loves everything about them, from their playful nature to their wrinkly skin, there is nothing that She dislikes.

FGM  must be funded urgently to save girls from a lifetime of suffering and even death. National Trigeminal Neuralgia Awareness Day